Knowing the popular name of a law doesn't mean that you'll be able to find the text of the law easily. The news media often refer to laws by their popular names, but rarely use the official citation.  If you've Googled like crazy and still can't find your law, there are four methods you can use to try to find it. 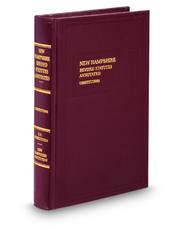 First, check the index to the print version of the New Hampshire Revised Statutes Annotated. There's an entry in the index for Popular Name Laws that lists the popular name and where the law can be found in the current statutory code. Many public libraries in New Hampshire have the statutes in print. Click on the book to the left to find the libraries.

Third, search the General Court's bills database. This goes back only to 1989 so if your law is older than that, it won't be there. Also, the searching in this database is a little bit buggy. For example, there's a New Hampshire law called Joshua's Law. If you search on "Joshua's Law" nothing will come up. But if you search on "Joshua" you'll find the law (it's Chapter 152).  Another problem is that sometimes a popular name isn't part of the bill at all. That's the issue with Jessica's Law. The act is there (Chapter 254), everyone calls it Jessica's Law,  but they didn't use "Jessica's Law" in the final text.

Finally, if all else fails, email the Law Library at lawlibrary@courts.state.nh.us and we'll find it for you, or we'll try very hard anyway. This is a public law library so anyone is welcome to ask us for help.

Who? What? & How?
The 11 Federal Holidays: What, When, Why, And How These Days Got To Be Holidays
FDLP Library Shelfie Day @ the NHLL
HeinOnline: Secrets of the Serial Set
Open to the Public

Enter your e-mail address to receive notifications of new posts by e-mail.